What is Brackish Water? | All You Need to Know

Find out all about brackish water. What is brackish water? What lives there? Is it drinkable? We’ve got all the answers in today’s post! 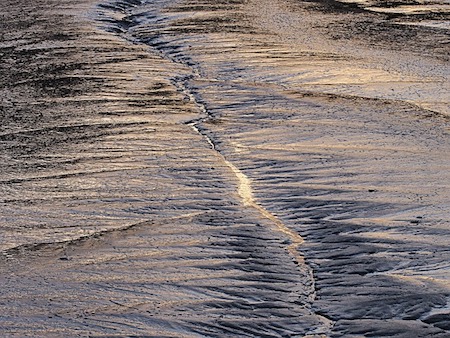 What Is Brackish Water?

With less salt than seawater and more salt than freshwater, brackish water is the result of the mixing of these two types of water. Brackish water generally has around 0.5 to 30 grams of salt per liter. It isn’t a very specific definition, so there is a wide range of salt concentrations that can be found in brackish water.

The broad definition of brackish water goes as follows:

Brackish water is water having more salinity than fresh water, but not as much as seawater. It may result from mixing seawater with freshwater together, as in estuaries, or it may occur in brackish fossil aquifers.

The scientific term for the “saltiness” of the water is salinity. Therefore, brackish water can have a high variance of salinity.

What Is the Salinity of Brackish Water?

How Does Brackish Water Occur?

The occurrence of rain can cause the freshwater and saltwater boundaries to move, often changing the volume of brackish water in the process. This same result can occur from the addition of freshwater.

Brackish water is most commonly found in estuaries. These are places where a freshwater river meets the sea. The resulting combination of freshwater and salty seawater is brackish water.

What Are Some Examples of Brackish Water?

Some seas and lakes are brackish – technically. Such brackish examples include the Baltic Sea, the Caspian Sea, and the Black Sea. Keep in mind that since we are talking about seas, we also talk about different levels of salinity when it comes to such massive bodies of water.

Estuaries generally have shallow bodies of water that benefit of a lot of sunlight throughout. Because of their optimum conditions for habitation, estuaries often function as the first homes for various types of aquatic lifeforms before they leave for the ocean. The hospitable conditions of estuaries allow for a diverse range of organisms to live within the estuary. Such organisms include algae, marsh grasses, brackish fish, crabs, shrimp, and oysters.

However, some seas and lakes are themselves already brackish. Back to the aforementioned example of the Caspian Sea (somewhat misleading called “Sea” when it is a fact the world’s largest lake), it is comprised of brackish water. Its salinity (saltiness) is around a third of that found in typical seawater.

brackish water is also the primary waste product of the salinity gradient power process. Because brackish water is hostile to the growth of most terrestrial plant species, without appropriate management it is damaging to the environment.

If you are wondering whether there is a connection between salinity, wastewater, and water softeners, you might be on to something. Increased salinity levels in wastewater – from sources such as water softeners – can lead to soil and plant damages. Since many areas (parks, stadiums, golf courses, school grounds, etc.) use recycled water for irrigation, the increased salinity of this recycled water harms the environment overall.

With the current water shortages affecting many states in the U.S. – and California in particular – there is no wonder why wastewater/recycled water salinity and the regulation of water softeners have become crucial issues to tackle for both authorities and communities.

A lot of brackish water bodies can be a very hostile living environment for organisms. Consequently, many species that exist in brackish water are specifically adapted for saltwater survival. However, this is far from the whole story.

Is Brackish Water An Optimal Environment for Life?

Salty brackish water is often incredibly fertile, meaning that the fish in this aquatic environment are normally healthy and fat. The organisms that survive in brackish water generally have specific adaptation mechanisms to cope with the high concentration of salt. They thrive in these conditions but have to remain adaptable to the changing salinity of brackish water. 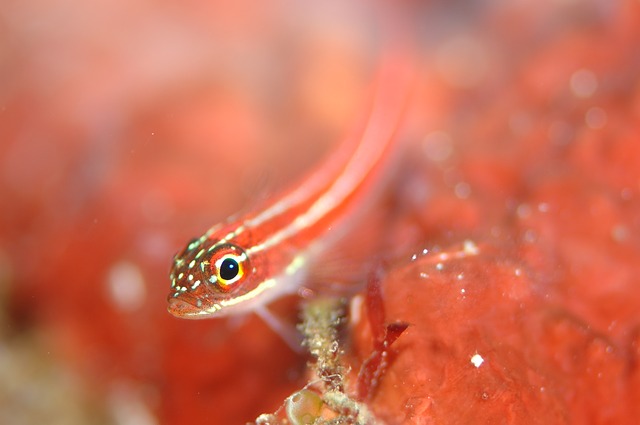 A few ordinarily saltwater fish species such as striped bass and redfish can live in freshwater as well, and consequently, they can explore areas of brackish water.

What Fish Can Live in Brackish Water?

The arrowhead and fahaka pufferfish are freshwater organisms that are also often found in brackish water. These fish can grow up to 43cm in length. As with all pufferfish they can inflate themselves when intimidated by other organisms. They carry the poisonous tetrodotoxin and mainly feed on mussels and snails.

Gobies are small (less than 10cm long) fish which reside in brackish water habitats in both tropical and temperate climates. They thrive in lower rivers, salt marshes, and mangrove swamps. The larvae of the freshwater varieties are sent downstream to more brackish waters, only returning many weeks or even months later. Gobies use their teeth to scrape algae from rocks.

Scats, although able to survive in freshwater environments when young, prefer brackish water settings when they have fully matured. These fish scavenge for algae and feces. The largest examples of scats have grown up to 38cm in length. They also have remarkable longevity, being capable of living for more than 20 years in the right brackish water conditions.

Gars, or garpikes, are a relatively large fish species with highly scaled and elongated bodies. They primarily inhabit freshwater but several variants also live in brackish waters, often being able to travel through these bodies of water with wide-ranging salinity. 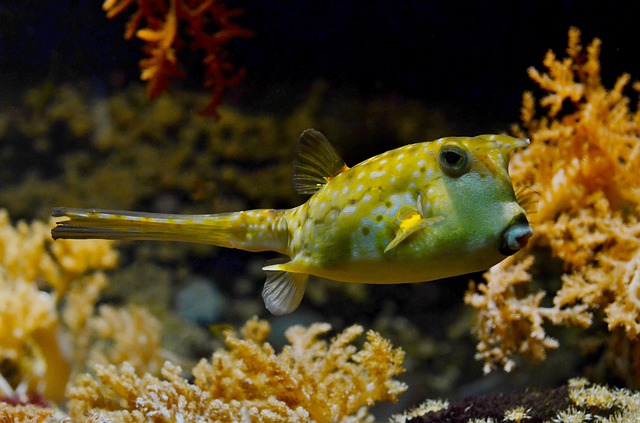 Certain other saltwater fish can survive in non-especially salty brackish areas, even when they wouldn’t otherwise go into freshwater areas.

Archerfish are a brackish water-inhabiting fish which are also predators of insects. They shoot water at small prey to knock them out. They are accurate at between 1- 2 meters from their prey but are known to try to hit their target from as far away from 5 meters, taking multiple shots if they fail initially.

What Other Animals Can Live in Brackish Water?

Besides the fish, we already mentioned, there are other animals that can live in brackish water. We can mention the molly fish, the European shore crab, the bull shark, the shad, striped bass, sturgeon, tilapia, trout, herring, lamprey, the pufferfish we already mentioned, salmon, and more.

What Plants Can Live in Brackish Water?

Many plants that thrive in freshwater conditions can also do well in brackish environments, such as anacharis, anubias, cabomba, cryptocoryne, hornwort, wisteria, and vallisneria.

However, since there is a high degree of variance between brackish waters, some being significantly saltier than others, the survivability of these plants often depends on the specific salinity of the brackish water in question.

To this end, anacharis, also often known as waterweeds, are known primarily to be found in freshwater bodies, but can also be present in brackish water.

Similarly, anubias plants, which can be either aquatic or semi-aquatic, are known mainly to grow in streams and rivers but are also present in marsh environments.

Camboma, also referred to by its vernacular name fanwort, are commonly used as aquarium plants due to their aesthetic attractiveness and their rapid-growth qualities. They can survive in freshwater and brackish water with low salt-level salinities.

What About Human Life? Is Brackish Water Dangerous?

Even if we witness some incredible reports in the last few years regarding the illness dangers of swimming in oceans and golfs, the literature and research registered few cases of brackish water illnesses related to swimming.

But Is Drinking Brackish Water Safe?

The jury is still out on this one. On one hand, brackish water is not technically saltwater, so it will not slowly and painfully kill you as ocean water would do. Other experts support the idea that some salt in the water helps you hydrate better. For this reason, re-hydration drinks (think Gatorade) contain some significant amounts of sodium.

On the other hand, we are also in the middle of a neverending debate regarding whether drinking soft water is safe or not. As we already mentioned in our guide to water softeners salts, we should all limit the intake of daily sodium, although it is not without health benefits in small quantities.

How Do You Treat Brackish Water to Make It Drinkable?

Humanity is still not fighting for every drop of water left on the planet, but it is preparing for quite a while to turn saltwater and brackish water into drinkable water. The system that can achieve such a goal is and has always been reverse osmosis.

On an industrial level, reverse osmosis is one of the best and safest methods to desalinize water. In a home environment, as you know, reverse osmosis water filters can eliminate 99.99% of all contaminants and impurities in water, including sodium and potassium.

The extent to which water can be considered “brackish” is most accurately described by specific gravity, a measure of how dense the water is relative to the density of pure water. Tools such as a hydrometer or a refractometer are used to measure the specific gravity in a body of water. In case – for some reason – you feel you are drinking too much brackish water, a reverse osmosis system is what you are looking for.

Moreover, installing an RO filter to further purify the water softener brine in your home might be one of the wisest moves to protect the environment and get reusable water for some of your household chores.

Despite its confusing name, brackish water is not contaminated or dangerous. It is a type of semi-salty semi-fresh water occurring naturally in many parts of the world. Just like any environment on the planet, it is harsh to some organisms, while it allows others to thrive.

When it comes to human-made brackish water, however, things can get messy. Brackish water may be the consequence of water pollution and, if left unattended, can lead to further environmental damages.

If you have other questions on brackish water and how we should all position ourselves in relationship to it (in case the saltiness comes from human activities), let us know in the comment section below! We will answer your questions as soon as possible!