The Different Types of Water Pollution

In today’s article, we will review various types of water pollution. We list the reasons and terminology to describe this huge problem in modern society.

Water pollution is becoming an ever-increasing problem in today’s society. Our over-reliance on chemicals and a rapidly increasing population are just two of the reasons why.

In today’s article, we take a look at the different types of water pollution that affect us all around the world.

Next, let’s take a look at the different types of water pollution. Each of these 3 categories we just described is caused by a different method of pollution. Here are the most common ones:

This is the type of pollution that is most common to us as it is the most visible. This is what we see floating in rivers, oceans, and lakes in the form of plastic bottles, trash, oil, and other chemicals. Fracking is a more recent contributor to surface water pollution in our local waterways.

Microbial pollution relates to viruses, bacteria, and protozoa found in water. These are naturally occurring organisms that can be very dangerous. Examples of these are E.coli, Giardia, and Cryptosporidium. Microbial pollution is a particular problem for those in developing countries that don’t have water treatment plants or any form of water sterilization.

Microbial pollution is commonly caused by:

Water chlorination and ultraviolet light filters are ways to disinfect water and kill these viruses and bacteria. You can find out more about UV and well water filters in our guide.

Groundwater pollution is commonly caused by chemical pesticides and herbicides used in agriculture. This kind of pollution is becoming more commonplace due to our reliance on more “productive” farming techniques that give greater yields.

These chemicals are particularly problematic for those with private well water supplies. A good water filter is highly recommended for those who do not have local authorities test their water supply.

Chemical run-off from farms, factories, and industrial plants flows into rivers, lakes, groundwater, and seas. Many of these chemicals are just emerging as being hazardous to our health and are particularly hard to identify and protect against.

Chemicals kill local animals and their habitats destroyed. A further consequence is that the toxins that they ingest transfer to humans when we consume them like meat in the supermarket.

Pesticides, metals, solvents, and petroleum are all common chemical run-off that is detected in waterways across the country.

The most recognizable form of chemical pollution to us would be oil spills, which are never far from the media. But, this type of pollution goes on every day on a smaller scale much closer to home.

In order for a natural water habitat to remain healthy and self-sustaining, it requires a certain level of oxygen to be present. When excessive levels of biodegradable substances are present in a body of water, the number of microorganisms that feed on this waste increases too. In turn, they use up the available oxygen in the water. When oxygen levels drop, the harmless aerobic microorganisms die and more harmful anaerobic microorganisms start to take over. These can produce things such as ammonia and sulfide which can be hazardous to our health. A lack of oxygen in water can also be dangerous for animals like fish.

Fertilizers and wastewater cause nutrient pollution. By increasing the number of water plants like algae, the oxygen in the water can be severely depleted. Oxygen depletion can be really harmful to an ecosystem. Take a look at the last section to find out why.

This happens when pollutants don’t mix or dissolve into the water. It results in large particles that form a layer on the waterbed. This layer prevents plants and animals that live on the seabed or at the bottom of lakes and rivers from getting nutrients. It also changes the landscape and environment that they are so used to.

Well, that’s the end of our post on the types of water pollution affecting us. Check back soon to read more about the environment, water filtration, and pollution. If you don’t want to miss out on any new posts then make sure you ‘Like” us on Facebook or join our mailing list. 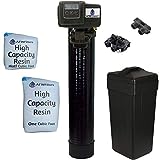 What are the major water pollutants?

The most common water pollutants are the ones that people, organizations, and companies tend to dump down the municipal water supply drain without thinking too much. These are, but not limited to, food processing waste, herbicides, pesticides, pollutants from livestock, VOCs, chemical waste, heavy metals, and, by far the most common, pathogens (bacteria, viruses, parasites, mold, algae, and other microorganisms).

What are the 5 main sources of water pollution?

Now that we know what the main pollutants, let’s get into the main sources of water pollution:

Despite strict regulatory control from the EPA and other authorities, sewage water accounts for a significant percentage of pollution both in the US and Europe.

Agricultural processes such as uncontrolled spreading of slurries and manure, tillage, land ploughing, pesticides and fertilizers are yet another cause of water pollution.

You’ve probably heard it a million times by now, but oil pollution is one of the most dangerous things that can happen to our water. Oil spills have been responsible for an incredible number of ocean creatures’ deaths.

If you live near a nuclear power plant, a science laboratory, or a medical facility specialized in x-rays and other processes that use radiations, chances are your source of water might be contaminated with radioactive substances. Always be sure to test your water supply if you live in such an area.

It’s no secret that lots of people dump a lot of things in nearby rivers, including plastic bags, trash bags, garden waste, and even dangerous stuff such as batteries or other items that contain chemicals.

What is the most dangerous type of water pollution?

By far the most dangerous type of water pollution is the one that involves harmful substances which can’t be filtered out by most water filters. These include lead, radioactive particles, and certain heavy metals.