How Does Groundwater Become Polluted?

Should you be concerned about contaminated ground water? Find out how ground water gets polluted and what’s being done about it.

Groundwater pollution is becoming a huge problem that affects more of us every day. The fact that some people in power refuse to believe, or are ignorant of what’s being reported is a scary one. In today’s article, we get to the bottom of some of the causes of groundwater pollution in the modern world.

Before we get into the sources of pollution of this kind, it’s important that we settle on a groundwater definition. Most sources define groundwater as:

The water stored under the surface of Earth in the pore spaces of soil and in the cracks of formations of rock.

Where does groundwater come from?

It’s precipitation (rain, snow, sleet, hail) that seeps into the ground. As it sinks down into the ground, some of it is kept in the soil and absorbed by plants. The rest of it keeps seeping down until it reaches a layer of rock which it can’t seep through. The water collects here and fills up the cracks and empty spaces. This layer of water that collects here is called ground water. The water above this that is held in the soil and rocks is called the water table.

Ground water is recharged (filled up) when precipitation falls or when rivers, lakes, or canals flood.

Why is groundwater so important?

Though many of us know very little about ground water, the statistics say it’s very likely that we have consumed it at some point.

These facts mean that groundwater is important to all of us. Should groundwater become polluted, then it’s possible that our drinking water is affected. It’s also possible that crops that we eat are irrigated with contaminated water.

Besides the reasons that directly affect our health, there’s also the matter of polluting our natural environment. We aren’t the only creatures that inhabit this planet, and by polluting groundwater we put more than just our own health at risk. Plants, animals, ecosystems… they’re all at risk.

So, how does groundwater become polluted?

It’s not a simple answer, at least not one definitive reason. Groundwater pollution is caused by a variety of things and we’ll do our best to cover them all over the next few paragraphs. This type of pollution can be caused naturally or by human activity. We’ll start with the natural reasons.

A lot of really harmful substances occur naturally in soil and rock. This makes it very easy for them to contaminate water that rests underground.

Arsenic, fluorides, chlorides, iron, manganese, radionuclides, and sulfates are all found in our natural environment. While they are all hazardous to human health, arsenic is particularly harmful. It is actually thought to be the cause of death for many famous people including Napoleon Bonaparte and Simón Bolívar.

Decaying organic matter is another natural process that can pollute groundwater.

Approximately 1/4 of American homes use septic systems as a means of getting rid of their toilet waste. Each system discards a very small amount of waste into the ground, but as the sheer number of them is so large, they become a significant contributor to ground water contamination.

Septic tanks are a source of chemicals and detergents, and also viruses and bacteria.

Hazardous wastes are things that need to be disposed of by a special licensed authority. Things like batteries, oils, garden chemicals, medicines, and swimming pool chemicals shouldn’t be emptied into something like the toilet or down the drain. Unfortunately, they often are. Whether through ignorance, laziness, or improper training, it happens a lot more than it should. This means chemicals find an easy route into groundwater.

These leads on from the last reason. If chemical waste is not disposed of properly and is put in the trash, it ends up in municipal landfills and not hazardous waste ones. Once here, it can seep into the ground through rainwater run-off.

Modern landfills are required by law to have some form of protection to prevent contamination. This is usually in the form of a synthetic or clay liner. However, old landfills lack this safety feature.

These are commonly used in agriculture to boost crop yields. They’re also used on golf courses, in gardens, and in business. Some of them are highly toxic and can enter groundwater even after they are used in the “proper” way.

The EPA conducted a survey between 1985 and 1992 which analyzed contributing factors to drinking water wells. They found that of over 1,300 wells, 3.6%  contained levels of nitrates above the maximum contaminant level. They also discovered that over 50% of the wells had nitrate levels above the minimum reporting limit. You can see some of the statistics here. Nitrates do occur naturally in the ground in very small amounts, but they are used in more significant quantities in fertilizers.

The same study also found pesticides to be present in concerning quantities in 14.6% of wells.

Hazardous chemicals are commonly used in mining activities. Cyanide is used to separate gold from ore, and sulfuric acid is used in copper mining. The Santa Cruz aquifer is one such ground water source that is being affected by chemical leakage from mining.

What are the effects of groundwater pollution?

Besides the contamination of the water used for drinking and irrigation, there are some other reasons to be concerned about ground water contamination.

For starters, the clean-up operation and costs are huge. In fact, sometimes reversing the damage is impossible. The contamination needs to be controlled and the water needs to be treated. Communities sometimes just choose to abandon a water source that is too heavily contaminated and move onto another source. This is because the clean-up procedure is just too expensive and complex. The loss of a natural water supply like this is a massive problem. As the number of people on Earth increases, these natural, life giving springs become ever so sacred.

Contaminated ground water also impacts estuaries and other eco-systems. Habitats are irreversibly damaged by high levels of contaminants like nitrogen that affect plant life. Nitrate pollution has been blamed for enormous algae blooms that block sunlight from reaching the bottoms of rivers and lakes. Too much nitrogen also affects the oxygen levels of water. The lack of oxygen effectively suffocates the fish.

A worrying thing about ground water contamination is that because the groundwater moves so slowly, the contamination is sometimes not detected for a long time. This too affects the clean-up procedure and makes the process of isolating the source very difficult.

What’s being done about groundwater pollution?

The government is aware of the problem and there are federal laws that protect our natural water supplies. Worryingly, the latest administration seems hell-bent on undoing them though.

You can protect your household water with a whole home or reverse osmosis water filter. 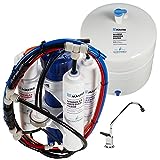 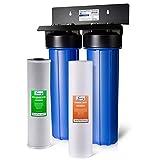 Cleaning ground water pollution isn’t necessarily hard, but it can be quite a tedious process. You’ll have to take care of several factors if you want to confront this problem efficiently.

First up, you’ll need to eliminate the source of the pollution. We’ve already mentioned what the potential pollution sources might be earlier in the article. An underground tank must be pumped dry and then dug out from the ground. A factory must be required to stop releasing toxic chemicals. Farms must be more careful about the chemicals they put on their fields. And so on, and so forth…

The next step is to monitor the extent of the pollution. You can do this by getting a water testing kit and see the results for yourself. There are numerous such kits that you can choose from, and you can find varieties of kits that allow you to test for multiple pollutants with the help of a single package. Keep in mind that for some pollutants, the GPM rating also plays an important role in choosing a good water filter or other filtration method.

The final step is to help out your local authorities to remediate the situation. You can start doing so by notifying them about the matter. And if you’re good with chemistry and biology, you can also try a cheap method of remediation yourself, namely bioremediation.

Chemical remediation is the process of inserting chemicals meant to fight certain pollutants inside the water. For example, you can use chlorine tablets to disinfect water and remove most bacteria, parasites, viruses, and many other pathogens that might lie in the ground water.